Christmas Toys for Boys in the 60’s 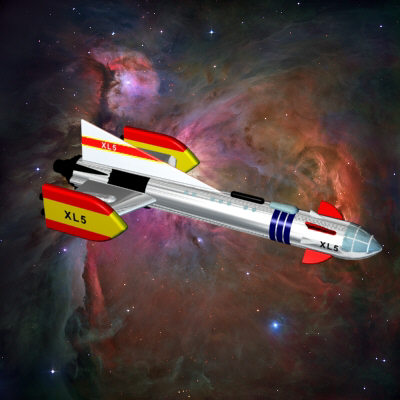 Christmas in the 60’s was a great time for toys.  The “space race” was upon us and toys for little boys were often geared toward military and space exploration themes.  And of course, there were toys based on TV series just as there are today.  So, for you oldsters out there, how many of you lusted after one or more of these great toys:

I had the bazooka and the Voyage to the Bottom of the Sea playset.  I also remember the Sgt. Saunders Tommy Gun from the Combat! TV series as a real favorite of mine – many imaginary Nazis bit the dust in our playtime patrols down on Second Street in Greenfield.

Three other toys still shine bright in my memory:

Fireball XL5 – the space ship flown by Steve Zodiac and his ship’s doctor and love interest, Dr. Venus.  His co-pilot was a robot named Robert, and their commander at headquarters was Mike Mercury.  The series ran on TV every Saturday starting in 1962.  The show was produced entirely through puppetry (called Supermarionation) by the husband and wife team of Gerry and   Sylvia Anderson, best remembered for Thunderbirds and Space 1999.   The playset from 1963 featured the ship and all the main characters – I got two of them the on same Christmas!

One of two XL5 playsets I received for Christmas in 1963

For those of you who remember the series, check out this link for a real hoot! http://www.youtube.com/watch?v=nXGGuqXB8h4&feature=PlayList&p=0B90F3E9064A759E&playnext=1&playnext_from=PL&index=20 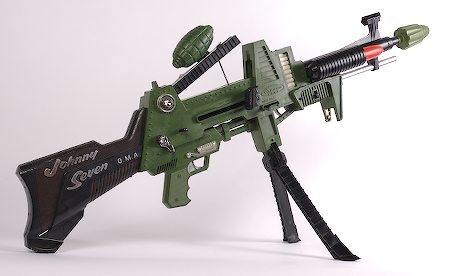 And of course, there was the famous Johnny Seven O.M.A. (One Man Army), released in 1964.  The Johnny Seven was a multi-function weapon that worked as a grenade launcher, Anti-tank rocket, Armor-piercing shell/Anti-bunker missile, Repeating rifle, Tommy gun, Automatic pistol, and Bipod-mounted rifle.  This was the toy that Myron the postal worker (played by Sinbad) lamented in the movie Jingle All the Way.  Myron blamed all his problems on the fact that he didn’t get a Johnny Seven O.M.A. for Christmas when he was a child.  Honestly, I remember the toy, but I didn’t know anyone who actually got one for Christmas.  Here’s a link to the TV commercial.

And way back in 1961, there was Jimmy Jet – Although I didn’t own one of these, a friend did, and I remember it well.  A jet cockpit, with steering wheel and lighted control panel, the central screen had a backlighted scrolling landscape with the figure of a jet superimposed.  You steered to move the jet from side to side onscreen as the landscape rolled past.  Actually, it’s easier to show it than to describe it – here’s the commercial.   To kids back then, it was exciting….today, not so much.

So, when you’re out shopping for your kids, looking at Nintendo DSi’s and iPods, just imagine what it was like in the days when you could bring a child’s Christmas dreams to life for less than ten bucks!  Merry Christmas to all, and I hope Santa brings you that Johnny Seven O.M.A.!!

This entry was posted on Saturday, December 19th, 2009 at 6:16 pm and is filed under Family, Uncategorized. You can follow any responses to this entry through the RSS 2.0 feed. You can leave a response, or trackback from your own site.

5 Responses to Christmas Toys for Boys in the 60’s