A Long-ago Conversation with “Aunt Hattie”

While I was putting the post on Brown and Adams County together, I dredged up some old research material.  This reference was found on a website called Planet Murphy.  It contains a lot of genealogical information on a number of Irish families, including the Ellisons.  This excerpt contains a reference to J.R. Murphy’s encounter with our “Aunt Hattie” (whose real name was Harriet Osman) at the old log house on Vaughn’s Chapel Road, about 47 years ago:

The following was found my visit to Adams County about 1962 searching for James Ellison. This visit happened one summer day while in graduate school at the University of Michigan. Communications between Ellison descendents had long ceased and there was little information about Adams County. After reviewing an Adams County history book, it was apparent that there was another Ellison clan, probably related, but not of interest at this time. James Ellison and his family were my targets. I drove east of Dunkinsville searching for a minor cemetery which might have our own Ellisons. At approximately the reported cemetery location, there seemed to be nothing. So I stopped the car at an 1802 farm house and knocked on the door. When the door opened, an elderly lady greeted me, and I asked, “I’m looking for a cemetery with Ellisons and am a descendant of Stewart Ellison.” She replied, “Come on in, I know who Stewart Ellison is and I have all the records.” This was Mrs. Harriet Ellison Osman who lived five miles due east of Dunkinsville.

James Ellison was a member of the royal body-guard of the King of England for 16 years. After having his fifth child he decided to sail to America in 1820, leaving his family until he could raise sufficient money to send for them. On the way to America he was ship-wrecked, losing everything he owned except his bible. The bible was in the possession of Mrs. Osman in 1962. She was a descendant of Andrew Ellison (1811). The bible still showed the water-marks from the ship-wreck. In her possession were the immigration papers of James Ellison, which stated he was from Omaf, Ireland and the name of his father, Andrew Ellison, and his wife’s father, Thaman Stewart. He entered through the Department of Immigration on 2 September 1820. Osman thought that James Ellison lived on Wheat Ridge in the vicinity of Dunkinsville or West Union.

Mrs. Osman reported children and early descendants were buried in the “private” Ellison cemetery next to her 1802 farmhouse.

Mrs. Osman also added that Mary Stewart was also from Omaf, Ireland and had a twin sister, Myra Stewart, who married William McNeilan. So far, “Omaf” cannot be located. Shirley Graham reported on ancestry.com that Myra’s husband was actually Thomas McNeilan, and that one son, William McNeilan (1 May 1808 County Tyrone, Ireland), and a sister, Jane McNeilan, (1817) did immigrate to Adams County Ohio (about 1846-1850 for William). In 1850, William McNeilan was adjacent to Andrew Ellison on the census.

Comment: My biggest regret with this meeting is that an exact handwritten copy wasn’t made of the immigration paper to be sure there can be no other interpretation. Should it again surface (i.e. at the Adams County Library or in someone’s possession), this should be done. Mary Schmertz (descendant of John Ellison + Margaret Thompson) echoed this sentiment: “There are several things that make finding the truth about the Ellisons difficult. …Most of the family history comes from Hattie (Harriet Ellison Osman), who was apparently a stubborn woman who wouldn’t accept even solid evidence that (some of) her information was incorrect (e-mail of 16 October 2004).” 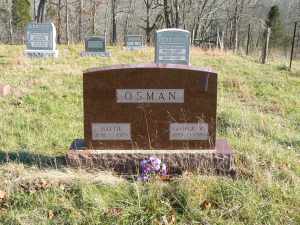 Hattie lies in the Ellison family plot near Dunkinsville 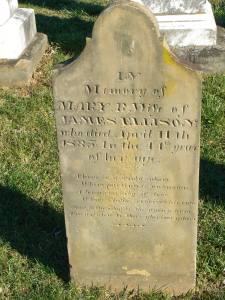 This may be the grave of James Ellison's wife, but it's hard to be sure. Too many Ellisons and not enough names to go around!

I’m not sure about the accuracy of Hattie’s genealogical data, but Mr. Murphy definitely got the “stubborn” part right!

This entry was posted on Tuesday, October 6th, 2009 at 10:50 pm and is filed under Family, History. You can follow any responses to this entry through the RSS 2.0 feed. You can leave a response, or trackback from your own site.