Back on the Bike (and Breathing Hard Again)

After 20 miles of easy biking, I decided it was time to start pushing it a bit. Having fought off a serious case of pneumonia this winter, I’ve been working on controlling my asthma for several months now, and it’s working pretty well. But I’m just now getting back onto the bike for real, and it’s pretty obvious that it’s going to take a while to get back to my previous form.

I’m concluding that my speed is pretty close to what it used to be, but my endurance is way down. I guess my first goal will be to get up to an hour at my current speed – but that’ll take a few days (or weeks).

In the process of preparing for this, I had to get my bikes back in shape. I own three French road bikes – two tourers and a club racer. All my bikes are Motobecanes, made by the French company of that name (they’re no longer in the bike business, but they continue to exist as a division of Yamaha that builds mopeds. Motobecane means “motor bicycle” in French)

The racer is my fitness bike. It’s a 1982 Motobecane Mirage Sport, a steel-framed 12-speed with racing gearing (meaning hard to pedal most of the time), downtube shifters, and all original components. 27″ x 1″ tires means a fast but rough ride. The plain old low-end 2010 steel frame, however, makes up for a lot in the comfort area. This bike rides sweeter than just about any aluminum-framed carbon-forked over-priced monstrosity you can buy today. It’s the bike I ride around the neighborhood, and it’s equipped for speed. I’ve had it for about five years – my first French bike, and the reason I have two others.
I bought it at a swap meet and had it overhauled at my local bike shop, the cost of which motivated me to learn how to do all my own bike repairs! 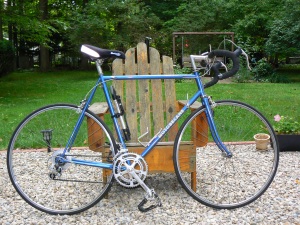 The real torture rack - the bike I'm using to get back in shape!

My 1977 Motobecane Grand Touring bike is definitely the best bike I own. It has a Vitus 172 DB chrome-moly steel main triangle, brazed lugged steel frame, and is completely original in it’s current configuration, right down to the Zefal pump that came mounted to the seat tube. It’s a light day tourer, and it’s great for longer rides that last all day. I got it from a friend at work – it had been hanging in his garage for over ten years. I completely overhauled the bike, but I only had to replace the rubber parts and the bearings, plus a bottom bracket spindle and a few cables. After a lot of leather treatment and mink oil, the Brooks leather saddle is as comfy as a hammock (Sally doesn’t believe it, but it’s true!). This bike was used on a fully-supported tour of Nova Scotia, so the frame is strong enough for heavier loads than I’ll ever carry! 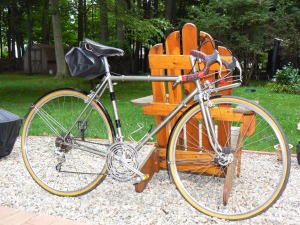 Here's my baby - the lightest frame and the sweetest ride I own!

The 1982 Motobecane Randonnee is my “heavy” touring bike. Although I’ve never used it for fully loaded touring, it’s capable of handling it. Rack and fender mounts are brazed onto the 2040 steel frame, and the wheels are wider for more load carrying capacity. I use it for trail and path riding. I got it from my neighbor’s trash one night when he wasn’t looking. Sally gave me hell for bringing it into the garage – it was a real rust pile! After stripping the frame, repainting, new decals, a few new components, tires, tubes, cables, new brake levers and hoods, new aluminum bars to replace the rusty chromed steel ones, she looks great! It’s the first bike I’ve built from the frame up – and maybe the last! 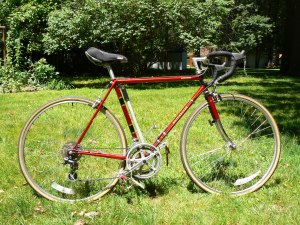 Doesn't look like she came from a trashpile now, does she?

I don’t really need three bikes, but I’m not likely to get rid of any of these in the near future – it’ll take quite a nice bike to tempt me to replace one of these three.

This entry was posted on Sunday, July 19th, 2009 at 7:17 pm and is filed under Bikes, Vintage Lightweight Bikes. You can follow any responses to this entry through the RSS 2.0 feed. You can leave a response, or trackback from your own site.

2 Responses to Back on the Bike (and Breathing Hard Again)